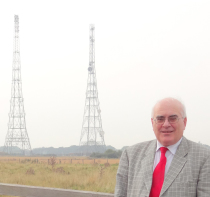 Geoff Simpson is a writer, speaker and historian, particularly concerned with the study of the Royal Air Force in the Second World War.

He is the author of a number of books and booklets, has participated in television and radio programmes, written hundreds of articles, delivered many lectures and talks and guided tours of sites associated with the Battle of Britain.

Geoff had a long association with the Battle of Britain Memorial Trust, custodian of the National Memorial to the Few at Capel-le-Ferne, Kent.

He is a Fellow of the Royal Historical Society, the RAF Historical Society and an honorary member of the Pen and Sword Club, for service media and Ministry of Defence information specialists. Between 2004 and 2009, Geoff served on the Council of the Society of Friends of the Imperial War Museum.

Here is the link to a public lecture delivered by Geoff at the University of Derby: https://www.youtube.com/watch?v=gPjeNI2mIhM