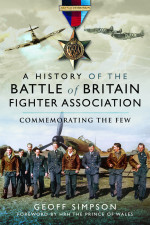 Geoff has written enthusiastically received books on a range of RAF subjects and the details of some of them are on this website. His hardback books include the Battle of Britain Fighter Association (of which only the Few may be full members) and commemoration of the Battle of Britain was produced with full access to the Association's archives. His hardback books also include How to Survive in Cheshire, a tongue in cheek look at the area where he has lived for many years.

Geoff has worked as a journalist, either freelance or staff, for more than 50 years. In a multitude of features and news stories he has covered a wide range of subjects, but now concentrates on military history and travel. His work has appeared in national and regional newspapers, consumer and specialist magazines and websites.

Geoff has delivered lectures and talks on diverse subjects, though many have related to the history of the RAF and the Battle of Britain in particular.

He was a guest lecturer on public relations at Manchester Metropolitan and Bournemouth Universities and, in 2016 delivered a public lecture at the University of Derby with the title, "Who Were the Few?" Shortly afterwards he gave a talk with the same title at the National Memorial to the Few.

He has spoken four times to the Society of Friends of the Imperial War Museum at Lambeth Road in London and has twice addressed meetings at St George's RAF Chapel of Remembrance, Biggin Hill. As an after dinner speaker, Geoff's appearances include speeches at the RAF stations at Coningsby, High Wycombe, Lossiemouth and Valley, as well as in the Oxford Union at a fundraising dinner for Help for Heroes.

Reactions to Geoff's public lecture at the University of Derby:-

One attendee was "interested to hear the Battle of Britain told from a different perspective - from the voices of the Few. The delivery and content were excellent - a good example of public speaking."

Another said: "The speaker was excellent, is very knowledgeable about the subject."